Nick Hughes is well known in Kidderminster. He is a local solicitor and an active member of the local community. He is also one of the Directors of Kidderminster Business Improvement District.

Nick qualified as a solicitor in 1983 and remained with the same firm, where he became senior partner, until 2019. He is now Director of HB121 Solicitors in Church Street.

He has been predominately focused on property law with specialist expertise in commercial, residential, and agricultural land. He has extensive expertise in acting for the rural community, dealing with a wide range of legal matters for farmers and landowners.

He also brings his wealth of experience and practical advice to estate development acting for many builders and developers, as well as to other areas of property law.

He has been president of the Worcestershire Law Society and is still on the committee.

Outside of the office Nick enjoys playing an important role in cultural, educational, and charitable organsiations. ‘I like to do my bit,’ he says. ‘I enjoy being part of the community and would really miss it if I wasn’t involved.’

He is at the heart of organisations keen to preserve Kidderminster’s heritage and has always had an interest in local history. He is Chairman of Kidderminster Civic Society and past Vice Chair of Kidderminster Heritage Opportunities Group and a past trustee of the Museum of Carpet.

He is also a Governor of Offmore Primary school and Secretary of John Brecknell Trust.

Nick started working in Kidderminster in 1981 ‘I never wanted to work in the city but preferred a market town,’ he says.

He married his wife Ann in 1992 and moved to live in Kidderminster in 1995. He has remained ever since and has four children who have all been to local schools, one is now a barrister.

Walking through Kidderminster Nick bumps into plenty of people he knows. ‘I generally find people friendly and there is a sense of community in Kidderminster,’ he says. ‘It’s not a small town but its small enough to know a lot of people. I think there is a generally positive attitude within the town.’

Nick says the town centre is now about three times as big as when he came here over 40 years ago. ‘I think it’s a shame we have empty shops, but other towns have a greater amount of empty shops,’ he says. ‘The town is fairly bustling and busy. I think there will always be an appetite for wanting to see and touch the things you might be buying rather than just looking at them online.

‘The various government grants we have had are very welcome to reinvigorate bits of the town centre that were perhaps a little tired.’
Nick says he was glad to become a Director of Kidderminster BID. ‘It gives you the opportunity to be at the heart of things that relate to the town centre,’ he says.

‘I’m proud of Kidderminster, of all it has achieved, and its potential. Our task is to make sure it reaches that potential.’ 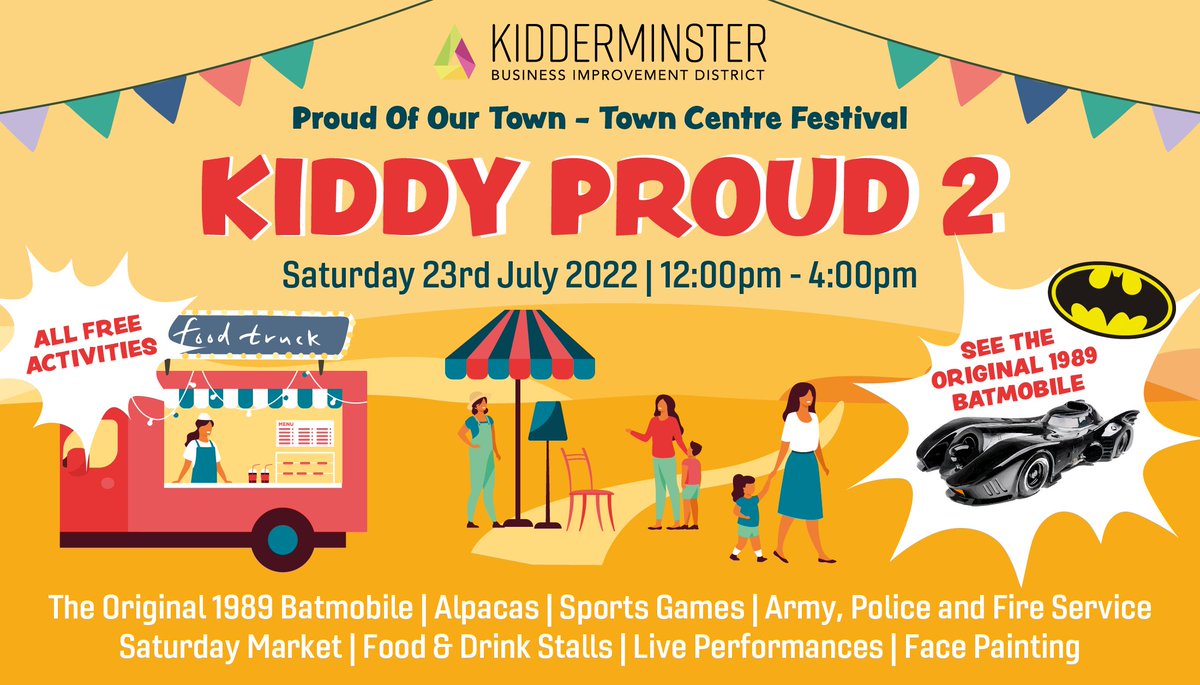 Kiddy Proud 2 is coming to #Kidderminster this summer! ☀️ We’re delighted to announce that the event will be back on Saturday 23rd July in the town centre 📍 There will be games, performances, stalls and a chance to see the 1989 Batmobile! Find out more: https://t.co/SSwPUiWyNU https://t.co/aVVH3pzuMt

Kiddy Proud 2 is coming to Kidderminster this summer! ☀️ We’re delighted to announce that the fun-packed event will be back on Saturday 23rd July in the town centre 📍 There will be games, live performances, stalls and a chance to see the original 1989 Batmobile! ⁠ ⁠ Find out more by visiting the News page on our website, link in the bio 🔗⁠ ⁠ #KidderminsterBID #Kidderminster #KiddyProud2 #WyreForest #Worcestershire #SummerFun #FamilyFun #Batmobile #Batman #Cosplay #SummerEvents #ThingsToDo